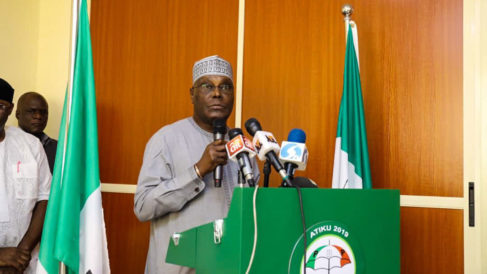 The criticism was contained in a statement released by Atiku’s presidential campaign organisation. Atiku said it was worrisome and embarrassing that Buhari included the late former Chief Judge of Enugu State, Justice Innocent Umezulike, as thirtieth on the list. “The question Nigerians should ask is: can an administration that is unable to distinguish between the living and the dead bring life to Nigeria’s economy?”

The action, according to him, was “nothing short of intimidation ahead of the 2019 elections. This is what the Buhari administration did in Osun where they froze the accounts of the Adeleke family and then illegally and clandestinely paid N16.7 billion to the Osun State government to facilitate daylight electoral robbery.”
The statement continued: “The Nigerian constitution guarantees every Nigerian citizen freedom of movement and freedom of association. This constitutional right cannot be taken away except by a court order. If the Buhari administration wants to curtail the rights of Nigerians, then they must go to court and obtain a court order. Anything short of this is unconstitutional and extra-judicial. This sudden dictatorial act brings to mind President Buhari’s comments for which he was condemned by the international community and by the generality of Nigerians.”

While delivering an address at the annual general conference of the Nigerian Bar Association on August 26, 2018, Buhari had said: “Where national security and public interest are threatened or there is a likelihood of their being threatened, the individual rights of those allegedly responsible must take second place, in favour of the greater good of society.”

The statement noted further that the travel ban “is a throwback to Buhari’s evil Decree Two of 1984 which criminalised truth telling, if it did not please Buhari, proving that dictators can grow old, but they can’t grow into democrats.”Warning on the economic fallout of the order, Atiku said: “Under the Buhari administration, Nigeria has witnessed an unprecedented capital flight out of the nation, to the extent that we are not even listed among the top 10 recipients of Foreign Direct Investment in Africa in the latest ranking by the United Nations Conference on Trade and Development. It is salient to note that we were number one under the last PDP administration.

“Funny enough, the Buhari administration was unable to stop Abdulrasheed Maina, their financier, from leaving the country after he was illegally brought back by them and reinstated to the federal service with double promotion. It is precisely this type of draconian orders that have chased investors away from Nigeria and it is precisely why Nigerians will chase this recession-friendly government away from power on February 16, 2019, so that we can begin the job of getting Nigeria working again.”

Also, human rights lawyer and a Senior Advocate of Nigeria, Femi Falana, said the ban is a sad reminder of the reckless placement of political opponents on security watch list and seizure of their passports by the defunct military junta.

According to him, “The right of citizens to freedom of movement guaranteed by Section 41 of the Constitution and Article 12 of the African Charter on Human and Peoples’ Rights (Ratification and Enforcement) Act could not be abridged or abrogated by the executive outside the procedure permitted by law.”The Socio-Economic Rights and Accountability Project (SERAP) faulted the order. “Banning 50 alleged high-profile corrupt Nigerians from travelling abroad without any legal basis and a judicial authorisation is clearly arbitrary, repressive and illegal, as it breaches constitutional rights and the country’s international obligations, which protect the rights to freedom of movement, to leave one’s country, to privacy, and to due process of law,” SERAP said in a statement by its deputy director, Timothy Adewale.

“It is always important that the definition and interpretation of the law should be as certain as possible, and this is of particular importance in cases of corruption where citizens’ human rights may be at stake. We do not consider that such reasonable certainty can exist where the executive assumes patently judicial functions,” the rights group stated.

Alliance for New Nigeria (ANN) took to Twitter to declare its objection, saying: “It is unfortunate the outgoing President Buhari is yet to change from his trademark dictatorial ways of doing things. But more worrisome, this is coming from a president who is presiding over Nigeria, the nation, which supposed to be the torchbearer for the entire Africa.”

MTN wins Telecom Company of the Year, four others at ATCON Awards