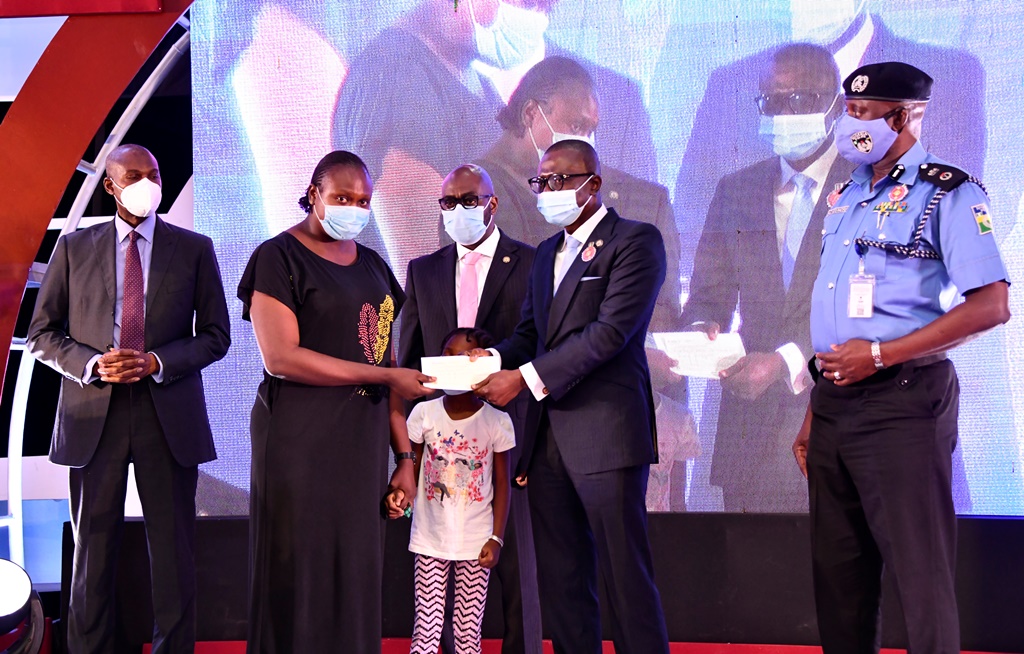 It was mixed feelings last Thursday for families of the six Police officers killed in different parts of Lagos State during the EndSARS protests hijacked by hoodlums, as they received a cheque of N10million each from the Lagos State Governor, Mr. Babajide Sanwo-Olu.

It was an emotion-laden moment for the widows of the slain Police officers, all of whom could not hold back the tears as they received cheques from the Governor. Some guests, especially women who were also overtaken by the emotion, wept uncontrollably as they watched families of the late Police officers mount the stage one after another to receive the modest compensation from Lagos State Government, after the gruesome killing of their bread winners.

It was a difficult task to get an almost inconsolable Anato Edward, widow of the late Yaro Edward, an Assistant Inspector of Police who was killed while on his legitimate duty, to speak on behalf of the other families.

To Governor Sanwo-Olu, Anato merely found courage to say: “Thank You for what you have done for us. I am very grateful.”

The compensation without any iota of doubt brought back bitter experience as widows of the slain Police officers and the children were in sober mood throughout the entire programme. After receiving the 10 million Naira compensation, the widows and their children could not control their emotion when Governor Sanwo-Olu further announced scholarship for all the children of the deceased officers. The scholarship offer would cover each of the children from their current academic stage to the university level.

Tears of joy and perhaps of sorrow rented the air. Governor Sanwo-Olu and some other eminent personalities had the onerous task of calming the women down.

The presentation of the N10million cheque to the deceased families and scholarship to children of the late Police officers during the 14th Annual Town Hall Meeting on Security organised by Lagos State Security Trust Fund (LSSTF) last Thursday was in fulfillment of Governor Sanwo-Olu’s promise to the Lagos Police Command during his visit to the police personnel after the EndSARS protests.

During Governor Sanwo-Olu’s visit to the police command on Thursday October 28, he promised that Lagos State Government would not abandon the police for their role in protecting lives and property in the State, and further boost the morale of officers after the EndSARS protests. The Governor said the Government would take care of the family members of the officers killed in the violence that trailed the EndSARS protests.

As parts of the measures put in place to heal the wounds of the police officers lynched in the State, the Governor also directed the Lagos State Scholarship Board to immediately award scholarship to the children of the slain officers, up to the university level.

Governor Sanwo-Olu also promised that Police officers serving in Lagos would get life insurance from the State Government, with a directive to the Executive Secretary of Lagos State Security Trust Fund (LSSTF), Dr. Rasaq Balogun, to establish the modality with the police leadership in the State.

During the visit, the Governor also approved the request to upgrade Police Cottage Hospital in Ikeja, directing the Commissioner for Health, Prof. Akin Abayomi, to inspect the facility for the required upgrade.

In addition to donating two 150KVA generating set to the police, Sanwo-Olu said the Command Headquarters would be connected to the State’s Independent Power Project (IPP) for constant power supply. He also promised to build two additional two-stories building at the Lagos State Police Command for additional offices for the personnel.

“As your Governor, I have come here to take full responsibility for the loss you have suffered in terms of logistics. Through the Lagos State Security Trust Fund (LSSTF), we will be replacing the police operational vehicles burnt in the violence. We have bigger plan for all the police stations burnt down. We will look for the funds and build befitting stations that will set the standard of what police stations should be,” he promised.

Speaking during the town hall meeting on security, Governor Sanwo-Olu commended the brave and gallant officers of the security agencies, especially Police officers who paid the supreme price and those who were wounded during the EndSARS protests in the cause of duties, for their dedication to duty and commitment to the eradication of crime in Lagos.

He said the officers have exhibited uncommon boldness and courage in the performance of their duties, noting that Lagos State will continue to appreciate their sacrifices and will be eternally grateful for all they did.

The Governor, who described the late Police officers as heroes, said the deceased sacrificed their lives to secure lives and properties in Lagos State. He said the compensation was government’s modest reward for their gallantry, noting that the gestures from the State Government would help the families to heal from the loss.

Governor Sanwo-Olu also assured that safety and security would never be compromised in the State, saying nothing will deter his administration from protecting the lives and property of the residents now and in the future.

He said: “As the Chief Security Officer of Lagos State, my solemn promise to all law-abiding citizens is that Lagos State will always be safe for them. We will stop at nothing to flush out all criminal elements whose sole aim is to foment chaos and perpetrate crime. Let me sound this note of warning; there is no hiding place for criminals and bandits in Lagos State.

“At the 2021 Budget presentation on November 10, I stated that the Lagos State Government will commit N9.16 billion to social protection, in order to critically address other contributors to crime like substance abuse, youth unemployment and poor education. We believe that it is easier to prevent crime than control it.

“Consequently, in order to guarantee sustained peace and security, we will embrace a deliberate and determined approach toward crime prevention and the preservation of law and order. Nothing will deter us from protecting the lives and property of Lagosians now and in the future. Safety and security will never be compromised in our state.”

Governor Sanwo-Olu also urged Lagosians to join in upholding the security of the state, as the security agencies and the government could not do it alone.

The governor stated that even as the government takes bold actions to secure the state, it is the duty of all Lagosians to ensure that they do nothing to jeopardise the peace, safety, stability and security of the state.

The Governor also urged Lagosians to remain vigilant and report all suspected attempts to disrupt law and order to the appropriate authorities.

Responding to the good gestures of Governor Babajide Sanwo-Olu, the widows and children of the Police officers who were murdered during the EndSARS protests in different parts of Lagos commended the Governor for the N10million donation and the scholarship award.

The beneficiaries commended the governor’s gestures, saying the compensation would help in wiping off their tears and brighten their hope that their children can achieve a great future as envisioned for them by their late fathers.

Mrs. Olamide Erinfolami, the widow of ASP Ayodeji Erinfolami praised Governor Sanwo-Olu for the N10million donation and also urged the Governor to fulfill his promise for continuity of the education of the deceased children.

“I am from Ekiti State; I don’t live in Lagos. I want to say thank you to Governor Babajide Sanwo-Olu. I want him to also fulfill what he promised that he is going to do for our children,” she said.

Mrs. Funmilayo Aderibigbe, the senior wife of the late Inspector Adegbemiro Aderibigbe, who could not hold her tears while speaking to journalists after receiving the N10million cheque, also hailed the governor’s gesture.

Ayotomiwa, one of the three children of late ASP Ayodeji Erinfolami also appreciated Governor Sanwo-Olu for giving him and his siblings scholarship to continue their education after the demise of their father. “Thank You Governor,” he said.

Speaking at the town hall meeting on security with the Governor, the Chairman, Board of Trustees, Lagos State Security Trust Fund, Mr. Kehinde Durosinmi-Etti, said the new Board of LSSTF has resolved to sustain the previous achievements made by the Board and to significantly improve the security architecture in Lagos State by seeking to attract the required resources and by providing a strong leadership and vision for safety and security in Lagos State.

He therefore urged individuals and organisations to contribute to the Security Trust Fund for security of lives and properties in Lagos State.

“I believe that our security architecture will benefit from being driven by more advanced technology, well trained personnel and robust equipment. But all these require adequate financial and material resources.

“We therefore need to act urgently by making donations to the Fund to ensure that we secure our state from those that mean us harm. The Fund welcomes all donations in cash and kind,” he said.

He said: “Security is a very expensive endeavour and we all know how much we spend in our various corporations and personal dwellings in this regard. Our security agencies are in dire need of basic infrastructure and equipment to function effectively and we need to come to their aid as a matter of urgency in our collective self-interest.

“I dare say that the events of the last few weeks have shown us the importance of security to the wellbeing, prosperity and progress of the State.”

Odumosu while stressing the need for crime-free society, implored all Lagosians to continue to continue to be law abiding and particularly obey all traffic rules and regulations including traffic lights.

The Police boss while commending Governor Sanwo-Olu’s administration’s contribution to security in Lagos State, said “The Command is privileged to have a Governor, who has an unmatched passion to create an enabling environment for the Police and other agencies to fight crimes and criminalities head-on in the State.

“He has not only provided the necessary logistics for officers and men to discharge their responsibilities effectively, he has also continued to make available a steady stream of financial support, to boost their morale for optimum service delivery.”

LASU jacks up school fees by over 120 percent