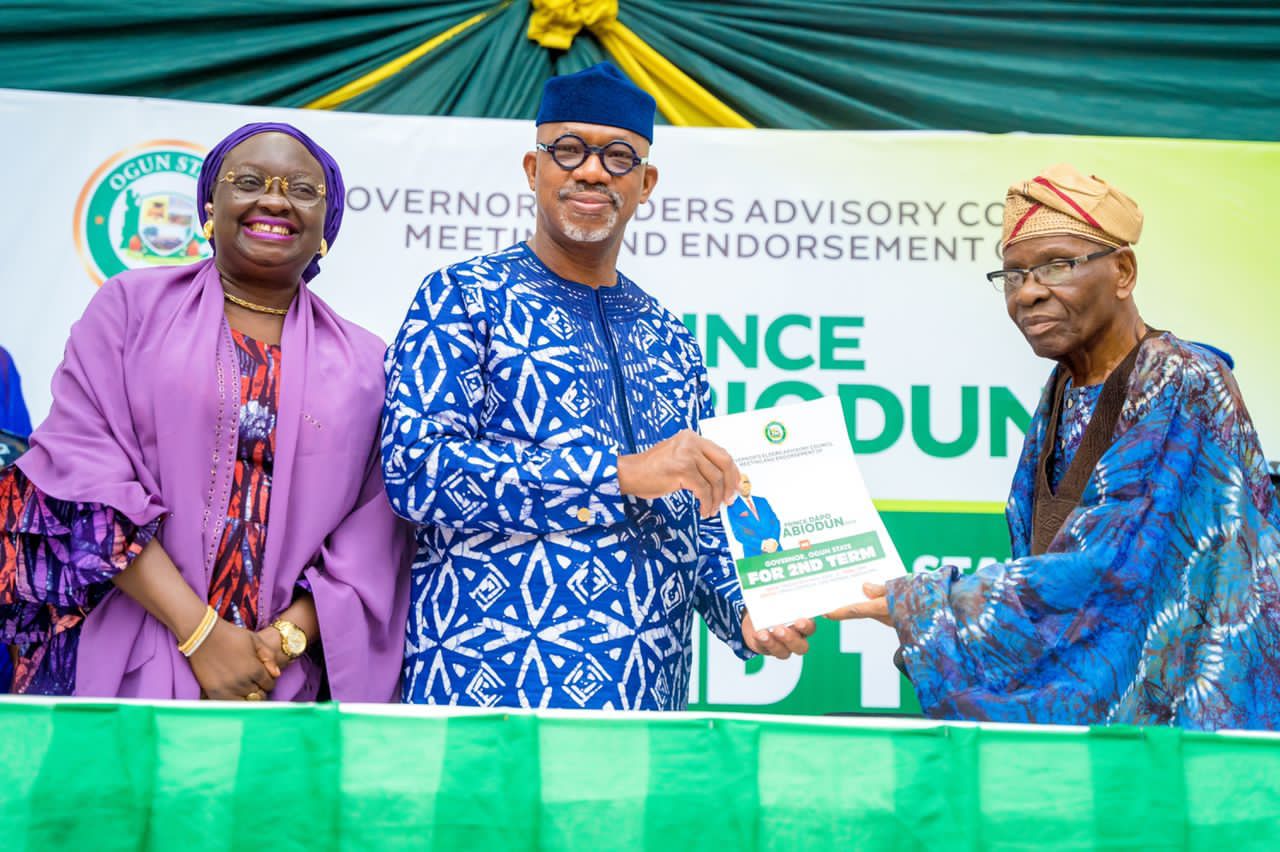 The Ogun State Governor’s Elders Advisory Council has adopted the state Governor, Prince Dapo Abiodun, for second term in office as as the Chief Executive of the Gateway state.

At a meeting held on Friday at the Obas Complex, Abeokuta, the state capital, the members of the GAC led by Chief Olu Bisola Okuboyejo, unanimously endorsed Abiodun for second term based on his sterling performance and re-engineered public good in the nooks and crannies of Ogun State.

After several testimonies on the performance of the Governor who was sworn-in on May 29, 2019 for his first term, the Chairman of GAC called for a motion for endorsement from the elders.

The Chairman later called for a voice vote and there was no dissenting voice.

In an emotional-laden tone, Governor Abiodun thanked the elders profusely for the endorsement and promised never to take them for granted.

“I didn’t get to know about this meeting until a couple of hours ago. I want to assure you that I sincerely appreciate you and will not take you for granted. I must thank my team, from my deputy governor, to the Speaker, Secretary to the State Government, Judiciary and the civil service. One can only be good as one’s team. I am really grateful to my good team. I also thanked the media for your balanced reporting, while hoping that we shall continue to enjoy your robust support in the years ahead.”

Earlier in his speech, Chief Okuboyejo remarked that “Prince Dapo Abiodun is a good example of Omoluwabi. The rare selling points for this Administration are confirmation that projects inherited from previous administrations have been completed and upgraded where necessary.”

His speech read in part: “Today, 6” day of May, 2022 is historic in the annals of Governor’s Elders Advisory Council as we publicly endorse the 2nd Term ambition of our indefatigable governor, Prince Dapo Abiodun for second term in office. Having been sworn-in on Wednesday, 29th May, 2019 as the governor, the current tenure would lapse on Sunday, 28 May, 2023.

“The government under his watch is methodical in fashioning the policy agenda around ISEYA with thematic
interpretation on Infrastructure, Social Welfare, Education, Youth & Women Empowerment and of course Agriculture. The delivery of these social contract elements has been applauded,
even by his ardent critics.

“At this meeting, Elders from different areas of the State have highlighted public goods that have been re-engineered in their domains. They have also mentioned the different kinds of infrastructure efforts that have either been delivered or are ongoing. The rare selling points for this administration are confirmation that projects inherited from previous administrations have been completed and upgraded where necessary.

“Other areas like Oke-Sopen in ljebu North, Ilisan in Ikenne, Onidundun in Obafemi-Owode, Ipara in Remo North, Ososun in Ifo, Isote in Sagamu and Ita -Oshin in Abeokuta North among other towns and wards across the length and breadth of the State have not been neglected.

“The issue of social order and protection is also germane to the elders and we applaud the way and manner in which the State Government has been addressing the matter. It is no gainsaying to allude to the fact that security is everybody’s business and the right and workable framework that has been provided by the government assure us that things will get better in our dear State.

“We cannot but commend the increase in Ease of Doing Business index that has significantly boosted foreign and indigenous investment in our dear State. The governor has shown himself as numero uno marketer of our Gateway State and the result is evidently clear in the rise in our internally generated revenue.

The Elders, I believe I am speaking your mind. Prince Dapo Abiodun, MFR is a good example of Omoluwabi. Aside from his sterling performance in the last three years, his predecessors were also opportune to steer the ship of the State for two unbroken terms. And as such, the tide should not be broken.

“On this note, and on behalf of all members of Governor’s Elders Advisory Council, I hereby proclaim the endorsement of the Elders for His Excellency, Prince Dapo Abiodun, to serve for second term in office commencing from May, 2023.”

SEE HOW TO MAKE N750K PER MONTH

The EASIEST and MOST ACCESSIBLE Way To Relocate To Canada This Year!