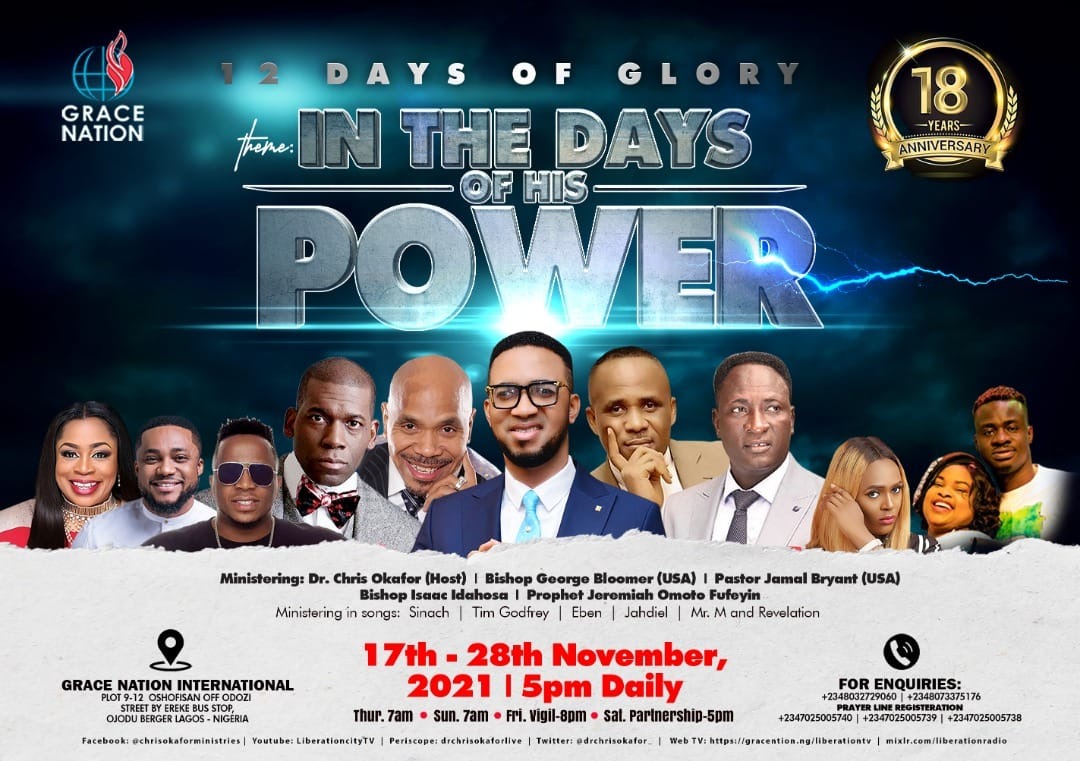 – THEME:  IN THE DAYS OF HIS POWER

All is set at Grace Nation International church aka Liberation city Lagos Nigeria as the church is ready to begin a 12 days of Glory.

The 18th  year  anniversary of the church with the theme IN THE DAYS OF HIS POWER beginning on the 17th -28th November 2023, famous Nigerians gospel musician Sinach, Eben, Tim Godfrey, Jahdiel and Mr. M and Revelation are billed to thrill faithfuls  with their scintillating praises and worship songs at the anniversary celebrations.

The church 18 years anniversary which has lots of major Nigerian gospel artistes line up to celebrate  the church anniversary will also witness Preaching, Deliverance and Prophetic Movement by some prominent Men of God across the world to bless faithfuls among them, are Bishop George Bloomer from USA, Pastor Jamal Bryant USA, Bishop Isaac Idahosa and Prophet Jeremiah Omoto fufeyin of Mercyland Prophetic ministry ofuru Delta state Nigeria.

According to the Senior Pastor of Grace Nation worldwide and the chief Host,  Dr Chris Okafor, the 18 years anniversary is aimed at thanking almighty God for his faithfulness and kindness over the church.

The Radical Prophet of God remarked that though there are many challenges along the way but God has been faithful to every member of the church worldwide, he said God has been so good to Grace Nation with various signs and wonders all to the glory of his name.

We have invited some prominent men of God to bless our members and also to remember Nigeria in Prayer for a smooth transition at the coming general election in the country Dr Chris Okafor,  remarked.

The 18years anniversary of Grace Nation worldwide will also witness other side attractions  like the {vigil} Night of Prophesy, Partnerships Conference, Empowerment of the Less Privileged and Pastoral Conference.