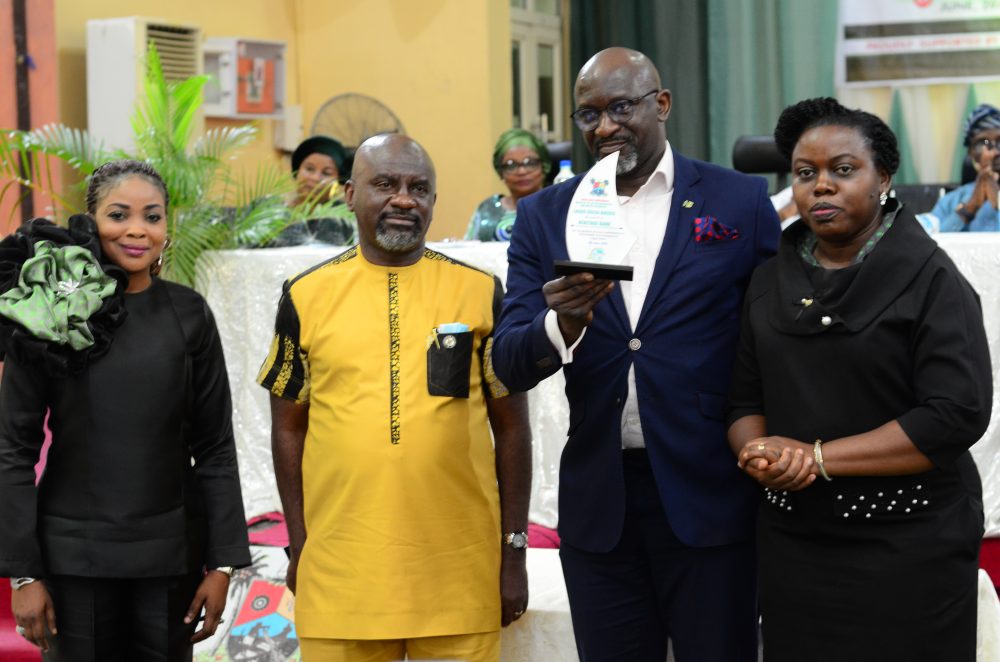 The bank joined other corporate organisations and schools within the State, awarded for their efforts towards protecting nature and limiting the impact of climate change on Earth.

The Award was given to the bank by the state government through the Ministry of Environment and Water Resources, Lagos State in the commemoration of 2022 World Environment Day Celebrations in which the bank was also a major sponsor.

Speaking at the year 2022 World Environment Day finale held at Alausa, Ikeja, Lagos at the weekend, the managing director/CEO, Heritage Bank Plc, Ifie Sekibo, commended Lagos state government and its ministry for the efforts exuded during environmental sustainability to protect ecosystems in supporting health and wellbeing of all creatures.

Sekibo, who was represented by the Chief Risk Officer, Heritage Bank, Mr. Kehinde Olugbemi, said: “as this year’s World Environmental Day Celebration theme implies, we have ‘Only One Earth,’ and truly, only one earth to protect. The fact is that human well-being is closely linked to the health of the environment. And our planet is reaching a breaking point. We are beginning to see the consequences of global warming on ecosystems and communities.”

Today, he said, industrialisation, though positive for human well-being on the flip side, has raked lots of havoc on human existence.

Quoting the World Health Organisation (WHO), he said, 24% of deaths can be traced back to avoidable environmental factors, adding that, Heritage Bank Plc has continued to prioritise and make huge commitments to environmentally sustainable practices to help build thriving communities and secure future growth potential.

“We realized that our people and other dwellers need clean air to breathe, fresh water to drink, and places to live that are free of toxic substances and hazards.

“So, as a part of our sustainability drive in the Corporate social responsibility space, we have continued to put sustainability at the heart of our decision-making for the sake of humanity and the bank’s own bottom line because a healthy planet is the backbone of nearly every industry on Earth,” he pointed out.

Earlier at the event, Lagos state governor, Mr. Babajide Sanwo-Olu stated that, there is an urgent need for everyone to focus on the need to live sustainably with nature for the benefit of mankind, adding that, this has become necessary to shift to a greener lifestyle through both policies and individual choices.

He added that sustainability of the environment is among the most pressing issues in the world today out of which the Earth faces triple planetary emergencies namely, Climate change, loss of biodiversity and Environmental Pollution.

The governor, who was represented by the Permanent Secretary, Office of Environmental Services, Dr. Omolaji Gaji, added that, the impact of the challenges has negatively made the achievements of Sustainable Development Goals (SDGs) less successful.

“With nature in emergency mode, the #OnlyOneEarth campaign for World Environment Day 2022, wants us to celebrate the planet through collective environmental action”, he said.

The governor commended Corporate Organisations, such as Heritage Bank for ensuring that the persistent drive of the State’s policy towards entrusting the legacy of greening and restoration of indigenous trees to the citizen is sustained.

Similarly, the commissioner for the Environment and Water Resources, Mr. Tunji Bello said, government through the ministry of the Environment & Water Resources has implemented several programmes to mitigate these challenges through Tree planting, Climate change summit, Environmental bees’ clubs in schools, waste to wealth and ban on open defecation.

Speaking through the Director of Sanitation Services Department, Dr. Hassan Sanuth, the PS added that, the government keyed into this call in 2021 by commencing the greening of Abraham Adesanya setback, together with restoration of some historical plants in specific locations like Agege, Idi-Mangoro where Mango trees were planted, Idi-Agbon in Ifako-Ijaiye where coconut trees were planted and in Lagos Island where breadfruit trees were planted at St. Paul Anglican Primary School, Breadfruit Lagos as part of this year’s celebration.

The guest lecturer, Dr. Ayo Tella while delivering his paper, noted that, Anthropogenic effects caused by human activities such as the felling of trees have altered the earth’s natural systems and survival of many species.

Heritage Bank had earlier donated plastic bins to Navy Town Secondary School, Ojo, Lagos, to mark the World Earth Day even as it has embarked on a project to address water crisis, whilst contributing towards making clean and potable water accessible to all.

Similarly, a global open-source movement known as Liter of Light Nigeria partnered with Heritage Bank Plc to provide sustainable solar electricity for Itomaro community in Lagos State while the bank, in 2020, had been on the move to distribute over 10, 000 mosquito nets to rural dwellers.