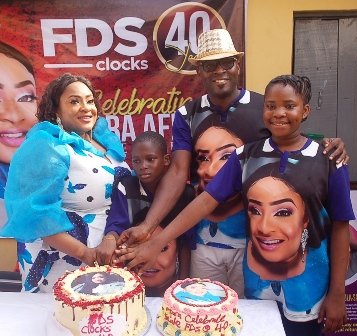 To mark the joyous occasion, the veteran actress who has spent over 23 years in the make believe industry, took the party train to the home of the Down Syndrome foundation, in Surulere Lagos state, to celebrate with the children.

It was a very colourful and exciting atmosphere as the children were full of smiles as they danced and the joy on their faces could not be quantified as they took to the dance floor to show their happiness that such a beautiful event could take place in their abode.

I’m Getting Older But it’s Ok-Celebrant

The golden lady of the day could not hide her joy and excitement as she grinned from ear to ear and was the cynosure of all eyes in her breathtakingly gorgeous birthday attire.

When asked how it feels to turn forty, the lady of style, with so much excitement said “well, nothing has changed, I don’t feel anything has changed in me. I think I’m only scared of the fact that I’m getting older but its ok”.

She was also asked to reveal four major secrets her fans did not know about her and here goes her response; 1. Sometimes I snore (laughs), 2. I enjoy cooking, I love it a lot, 3. if I had my way, I would love to be a full time housewife and not the celebrity everybody likes to see and lastly I can be timid when I see a crowd sometimes.

On what informed the choice of the Down Syndrome Children to celebrate her birthday with, she said “I am tired of showing love to people around me, I’m tired of giving my husband gifts. It’s not like I don’t give him gifts or care for my children but there are people that when you show this love to, it will go a long way. In addition, asides the fact that I’m forty this year, my foundation will be ten in May. So, if I say I want to celebrate my birthday the red carpet way, will I now have another party in May? So I decided to celebrate my special day with these special children and adults and then maybe in May, I will now have the red carpet party. Most importantly, I am here because I want the children to feel loved, feel important that celebrities can come and spend quality time with them.”

My Wife Is My Spiritual Mother-Celebrant’s husband Olukayode Salako

As expected, the celebrant’s husband was full of praises for his dearly beloved wife. He was almost unstoppable as he poured encomiums on her enviable personality “ She is so dear to me because I respect her for her values which she stands for. Foluke stands for integrity, dignity and value in the preservation of woman dignity. She has always been conscious of making herself a role model to the younger generation.”

Dr. Salako, who is also the Director, Media Buerau, National Intervention Movement also added that “She is my spiritual mother, she operates on a spiritual level. Foluke sees by herself, she is gifted with the spiritual skill of getting revelations from dreams. She got the revelation from her dream that where we are, the home of the Down Syndrome children, is where she must start the birthday celebration from. She married me not because of money but because she is convinced that I am her husband and she has been faithful. Foluke Daramola is also a woman that can do anything for love, she believes in love and family values and she believes in womanhood dignity. I love her so very much because she is a woman who deserves it”

Highlights of the celebration was the encomiums poured on the celebrant by various personalities who graced the occasion. Renowned Human Rights Activist Dr. Joe Odumakin praised Foluke Daramola Salako for her selflessness and courage to stand up for what is righ and contribute her quota to the development of the society.

She acknowledged the great role the celebrant has been playing as an ambassador of the Women Arise Non-Governmental Organisation and her prompt availability when the need arises. Dr. Odumakin in the spirit of the occasion also pledged to support the school with stationery.

There was the cutting of the cake with the children and celebrities; there was also a special dance performance by students from Bosworth School which is owned by the celebrant’s husband while the major part was the dance dance dance part where the special children were able to show off their dancing skills to the admiration of all.