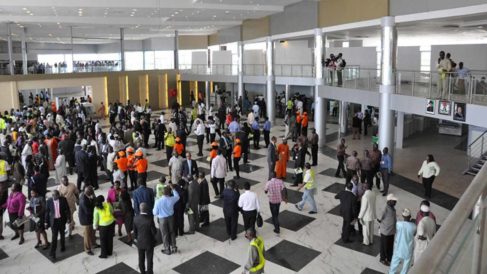 Some of the passengers who spoke with The Guardian said their programmes for the day and weekend were disorganized. One of the passengers, Michael Ike, said: “My elder sister is wedding tomorrow at Imo State and I have made all necessary preparations to get to Owerri this morning, only for me to get to the airport to see that labour officials have disrupted flight operations.”

The President of National Union of Civil Engineering Construction, Furniture and Wood Workers, (NUCECFWW), Comrade Amaechi Asugwuni, said paralysing the nation’s activities was to enforce the position of National Executive Council (NEC) of all organs and labour centres in the country.

According to him, “Our strike action is gaining impact. We will not rest until the Federal Government does the needful.”The spokesman of Air peace, Chris Iwarah, told The Guardian that labour has no right to stop its workers from duty and passengers from flying, stating that labour has crossed the bounds of rights.

He said: “Our position is you have the right to protest but you don’t have the right to disrupt our operations, because what we are doing is completely a private business. What they are doing is completely illegal. We expect security agencies to arrest the situation, to ensure those going about their lawful duties are not harassed.”
On passengers whose flights were disrupted, he said, “many of them have rescheduled. What they have done has caused a lot of economic impact on our operations, as millions have been lost.”

Similarly, the labour group went to the Island where there is concentration of banks and workplaces. They shutdown their operations, and chased out some of the workers who refused to comply.At Polaris and Union banks at Marina branch, the workers were chased out of their offices and their gates locked as they dared to prevent labour officials from gaining entrance.