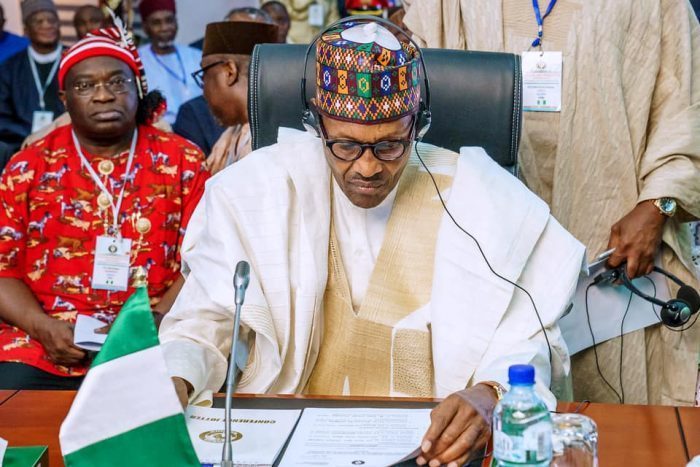 ”Our region has made commendable progress in the realization of its regional integration and we must not allow terrorist groups to destabilize our Community and undermine the aspirations of our people for a safe, secure and prosperous environment,” President Buhari said in his speech at the Extraordinary Summit of the Authority of ECOWAS Heads of State and Government on Counter-Terrorism.

”It is, therefore, our collective responsibility not to let up but to win the fight against terrorism and stamp out the scourge from our region,” he added.

Buhari, who joined other ECOWAS leaders for the special one-day Summit, which was also attended by leaders of Chad and Mauritania decried that terrorism, today, has become a major security threat across the globe.

He warned that the activities of terrorist groups constituted a grave danger to peace and security in West Africa, the wider Sahel and the global community.

”The frequency of attacks, the determination and resilience of the terrorist groups as well as the ease with which they raise funds and acquire sophisticated weapons are matters of serious concern which should engage our attention as a Community.

”Equally worrisome, is the continuing spread of the menace of terrorism in the region and the growing link between terrorism and organized crime. This is why we must not relent in our efforts until we defeat the monster completely.

”And the best way to achieve this objective is through coordinated regional actions and responses against terrorism, insurgency, banditry, inter-communal disputes while we also put in place policies and measures that will address their root causes including the re-establishment and protection of livelihoods,” he said.

Sharing the experience of Nigeria in fighting the scourge, the President told the summit: “As a major victim of Boko Haram terrorist activities, Nigeria has remained resolute in efforts to combat and eradicate them in all their forms and manifestations.

”In combating terrorism and addressing the resultant humanitarian crisis, through regional and international collaboration, ECOWAS as a Regional Economic Cooperation, would need in partnership with the African Union, to galvanise international support and solidarity to combat and defeat this menace in our region.”

The Nigerian leader also used the occasion to apprise the regional leaders on the situation in the Lake Chad Basin and the operations of the Multinational Joint Task Force (MNJTF).

He described the situation in Lake Chad Basin, historically a bastion of rich culture and civilization, an area abundant in natural resources providing livelihoods to tens of millions of people, as tragic.

He noted that the area has become an abode for terrorist groups and extremists whose primitive intent was wanton destruction of lives of innocent citizens and properties as well as public infrastructure.

On MNJTF, the President reported that the achievements recorded so far in the operations remain an exemplary model of regional collaboration.

”MNJTF has largely succeeded in degrading the Boko Haram terrorist group. This could not have been accomplished without the recognition by the affected Lake Chad Basin Countries and Benin Republic, of the need to harness our efforts and resources to confront our common enemy which has now been substantially weakened.

”While much still remains to be done, I encourage MNJTF to stay steadfast in their mission, as I urge the political leadership of the LCBC countries to continue to preserve our solidarity and commitment towards achieving durable peace and sustainable development in these areas.

”In this regard, it is imperative that we continuously strive to provide the necessary resources and tools to the MNJTF, the G5 Sahel Joint Force, the Accra Initiative and similar initiatives, to lead the war on terrorism, violent extremism and trans-border crimes across the region, ” he said.

Buhari said he expects that the adoption of the road map, priority areas and other recommendations to the Ouagadougou Summit, if properly implemented, would go a long way in addressing the spread of terrorism and violent extremism in the region.