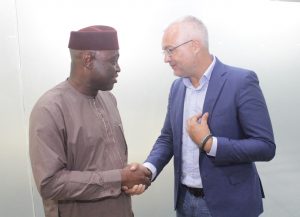 From Left: Biodun Oyebanji, Secretary to Ekiti State Government; in a handshake with Anders Einarsson, Managing Director, Promasidor Nigeria Limited; during the recent visit of Promasidor’s management to Ekiti State Governor’s office in Ado-Ekiti, as part of efforts at resuscitating Ikun Dairy Farm in Ikun-Ekiti.

The management of Promasidor Nigeria Limited recently embarked on an inspection of facilities at Ikun Dairy Farm for revitalisation as part of the partnership agreement with Ekiti State Government on its backward integration initiative.

This was done in furtherance of the pact signed in July in Abuja by the Managing Director of the company, Anders Einarsson and His Excellency Governor Kayode Fayemi on the utilisation of the farm for milk production.
The recent four-day visit to Ikun Dairy Farm at Ikun Ekiti, took the company’s team led by Einarsson to the Governor’s office where they met with the Secretary to Ekiti State Government, a host of Commissioners and top Government officials.
The Ekiti State Commissioner for Agriculture, Folorunso Olabode, who met with the team, expressed delight on the strong commitment by Promasidor in its source for raw materials for milk production, in line with Federal Government directives on backward integration.

He assured that Ekiti State would support Promasidor in its resuscitation drive of the dairy farm, as it is well positioned to boost supply of raw materials.

Olabode added that Ikun Ekiti community and people of the state want to see the milk processing plant function soon because of its economic benefits. This, he said is in the area of job and wealth creation.” The partnership is not a political gimmick and we are certain it will contribute to the growth of the state’s economy and employment opportunities for the citizens,” he affirmed.

In his remarks, the Special Adviser to Ekiti State Governor on Investment, Trade and Innovation, Akintunde Oyebode, said the collaboration with Promasidor will greatly help in the integration of the people and their living standards with the emergence of other small enterprises.

He pointed out that what is on the front burner is the regeneration of the farm for commercial agriculture.

Also present at the Governor’s office was the General Manager of Fountain Holdings, Oska Aiyeleso, who said the partnership will benefit both parties for commercial reasons.

Earlier on, Einarsson who described the partnership with Ekiti State as an exciting prospect for the company, avowed that Promasidor is prepared to regenerate the dairy farm and make it functional soon.

He affirmed that as the makers of quality products such as Cowbell Milk, Loya Milk, Cowbell Chocolate, Miksi Milk, Top Tea, Onga food seasoning, Sunvita Cereals, and others, local source of milk collection is paramount to ease less dependence on foreign raw materials.

According to him, Promasidor’s backward integration initiative would give the company an edge over others in the dairy market with the potentials of the farm.

Located on 500 hectares of land area in Moba Local Government Area, Ikun Dairy Farm was established in the early 1980s as an integrated agro-allied farm to boost the economy of the State. 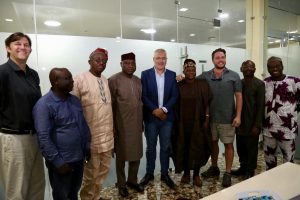