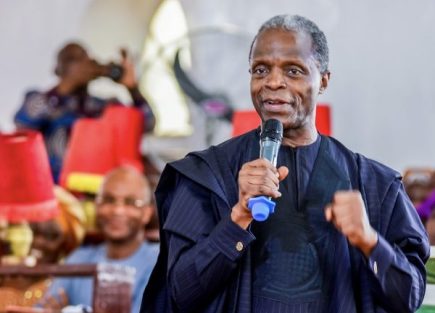 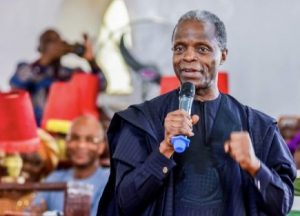 Some key principles for a nation to achieve greatness according to Vice President Yemi Osinbajo include righteousness, service and diligence, hardwork and planning as well as time consciousness.

Osinbajo made this known on Saturday at the Redeemed Christian Church of God (RCCG) Region 5, ‘Great Minds Summit 2019” at the RCCG’s Chapel of Blessing, Port Harcourt.

Delivering a keynote address titled `Exercising Kingdom Dominion’, Osinbajo said that the Church and Christians had the responsibility to transform the nation through exemplary lives and actions.

He said that Nigeria, with its great talents in all fields of endeavour, needed to imbibe the principles that made other nations great.

The vice president said the influence of the Gospel, alongside the right virtues, transformed not only Europe and America but also Asia.

“Let me explain how Emperor Meiji in 1871, (within three years of the Meiji restoration) having observed the phenomenal progress of the West decided to send a mission to the UK and America to discover how they did it.

“The mission became known as the Iwakura mission. It was led by Prince Iwakura Tomomi; it was a team of statesmen, scholars, administrators and students totaling 50 to UK and America and find out why these people are great.

“Many left behind to study; they studied the principles that made these nations great and of course, the Japanese copy very well; they copied the principles, and later Chinese copied from Japan too.

“What were those principles? Righteousness, integrity, forthrightness; Proverbs:14:34-righteousness exalts a nation, but sin is a reproach to any people.

“This principle applies to a man or woman; because a nation is first a person; Genesis 12:2, I will make you a great nation; first righteousness is the hallmark of the children of God.

“Hard work/planning –the puritanical work ethic; this is the hallmark of the Christian; the puritans were so hardworking; so diligent that hard work was named after them.

“Time consciousness, Ecclesiastes 3:1–to everything there is a season; a time for every purpose under heaven, preparedness.; we must be conscious of time.

The vice president said that righteousness meant integrity, honesty, trustworthiness; meaning ‘No’ for No and ‘Yes’ for Yes.

In her remark, Dr Ipalibo Banigo, Deputy Governor of Rivers, thanked the vice president for honouring the invitation to attend the summit in Port Harcourt.

She said that Osinbajo was passionate about the plight of the common people which he demonstrated in the manner he supervised the implementation of the Social Investment Programmes (SIPs).

“When the General Overseer, of RCCG, Pastor Enoch Adeboye was speaking about how we are going to move from great minds to greater minds and we should use this to help the poor; immediately, I thought about our vice president and all the good work he has been doing in this great nation.

“I recall on an occasion, I had the privilege of riding with him in Bonny when I also represented the governor at the flag off of the Bonny-Bodo Road.

“We got to a section of the road and there were so many women and men and boys and all his humility, he stopped the convoy.

“He needed to talk to them and to ask them how the programme had impacted on them,” she said.

Earlier, in his exhortation, Adeboye said that the highest level of dominion was that which the people benefited from.

He said greatness could only be meaningful when it was used to impact on the lives of the poor who were suffering.

In his welcome address, the convener, Pastor Belemina Obunge, said that there must be proper deployment of the resources God had given one towards helping the poor, for one to experience greatness.