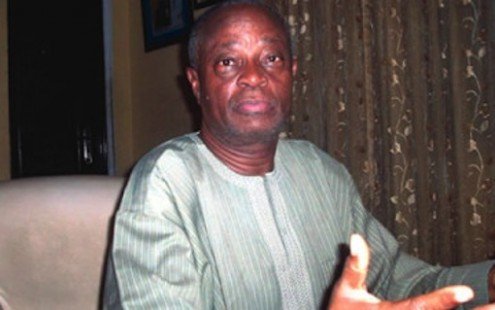 Ogunlewe, a former Minister of Works, declared this in an interview in Lagos.

When asked if he had any political ambition in 2019, he responded: “May be you don’t know, I am 75 years old, and what will a 75 year old be looking for in office again? Sorry, I am not vying for anything,” he said.

The Lagos PDP chieftain however called on members to work together for the progress of the party in the state.

He was reacting to Thursday’s holding of two parallel events by the Moshood Salvador-led executive and another group.

While Salvador was holding the party general assembly to mobilise members in Ikeja, a group of aggrieved members, led by former state party deputy chairman, Prince Ola Apena, was holding another rally in Ikorodu.

At the Ikorodu rally which attracted prominent members like former state Organising Secretary, Prince Abayomi Kuye, a vote of no confidence was passed on Salvador.

Apena told journalists after the rally that the group was not happy with the way Salvador was running the party, asking him to vacate office.

Ogunlewe, in his reaction, said that the party could not realise its objective of capturing the state in 2019 if members were working at cross purposes.

He, however, said disagreements are normal in a democracy, pointing out that ability to manage them is what matters.

“Election is around the corner. This is a time for unity and not for fight or discord.

“Personally, I see the same people in Ikeja and Ikorodu rallies as the same PDP. Yes, there are disagreements, which is normal in a democracy, we will sort ourselves out,” he said.

Ogunlewe said the call for Salvador to leave office was unnecessary as only the National Working Committee of the party could remove him.