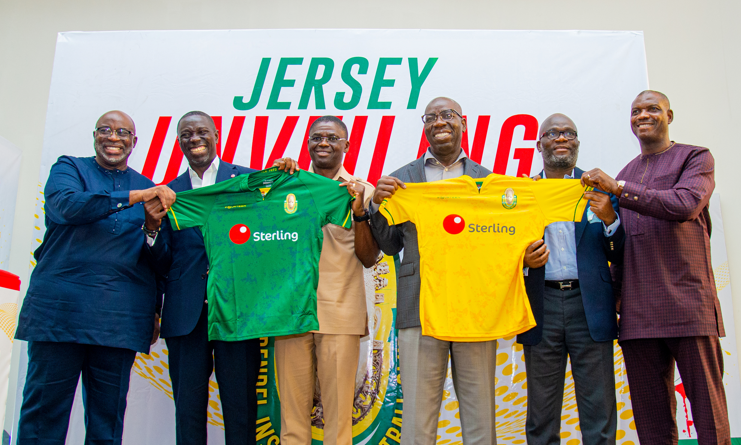 The sponsorship deal: the first of its kind in the history of Nigerian club football, saw players of Bendel Insurance FC showcasing their new kits with the Bank’s full logo embossed on the jersey at a colorful event held at the Edo State Government House in Benin City, the state capital.

Speaking at the ceremony, Chairman of Sterling Bank PLC, Mr. Asue Ighodalo, explained that the bank shares the philosophy of development championed by the Edo State government and sees the state as a development partner, with the deal representing more than a sponsorship deal, but an investment opportunity for the bank.

“We see ourselves as true partners with Edo State, because we understand the development philosophy of the state and that is why we are committed to the state.”

Governor Obaseki said that with the successful implementation of this kit sponsorship deal, the state government has taken its commitment to Edo State’s sports a step further by engaging the private sector in sports development.

He said, “For us in Edo State, it is a crucial step to invite the private sector into sports through a new governance arrangement that ensures transparency and sets the standard on how to properly administrate sports in Nigeria.”

“We first gave you confidence by rebuilding the Samuel Ogbemudia Stadium and 20 new mini stadia in all the local government areas in the state. And today, we are showing the world again that we mean sports in Edo by launching and unveiling the new jerseys of our teams. The problem we have in Nigerian sports today is that we have not successfully brought in corporate Nigeria to take their brands and support our local teams. But what Sterling Bank has done is a step in the right direction and will go a long way.”

Also, speaking, the 1st Vice President of Nigeria Football Federation (NFF) Mr. Seyi Akinwunmi said the Nigerian football scene is witnessing a landmark by the arrangement between Sterling Bank and Bendel Insurance FC. While urging other corporate organisations to emulate Sterling Bank, he pledged that the NFF will do everything required to make Nigerian football what it should be.

Among the dignitaries at the occasion were the spouse of state governor, Mrs. Betsy Obaseki; the Deputy Governor, Rt. Comrade Philip Shaibu and his spouse; and Super Eagles of Nigeria legend, Mr. Austin Eguavoen, among others.