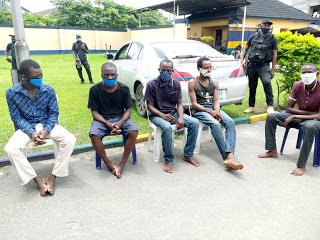 They were paraded on Wednesday.

The arrest of the five-man gang was achieved less 72 hours in which President Muhammadu Buhari ordered the police to fish out the killers to face justice.

Briefing journalists at the Police headquarters in Port Harcourt, Commissioner of Police, Joseph Gobum Mukan, said the victims, Nelson Nwafor, Fortune Obemba and Joy Adoki were kidnapped at Choba on the 7th of April, and the matter reported to the Anti-kidnapping unit, who swung into action and arrested the leader of the gang, Bright Iheachi, who made confession that led to the arrest of other gang members.

He explained that Nelson Nwafor and Fortune Obemba were actually students of the Rivers State University, RSU, while the late Joy Adoki was a student of Management Science in the University of Port Harcourt, UPTH.

Mukan said items recovered from the hoodlums include one AK-47, three magazines and 72 rounds of live ammunition.

On his part, the father of late Fortune, Mr. Bright Obemba said the boy was his only son, stating that no amount of money given to him would bring back his child.

Leader of the gang, Iheachi said he had a business deal with Nwafor and was betrayed by him, which led him and his gang to kidnap and kill him with the two others, Obemba and Adoki who were in his company as at the time of the incident.

Mukan had earlier said, “we brought you a report that one of the suspects, Friday Akpan, took operatives of the Anti-kidnapping unit to a forest at Eteo in Eleme Local Government Area of Rivers State, where he identified the decomposing bodies of the undergraduates and narrated how they sexually assaulted the female and killed them all.”