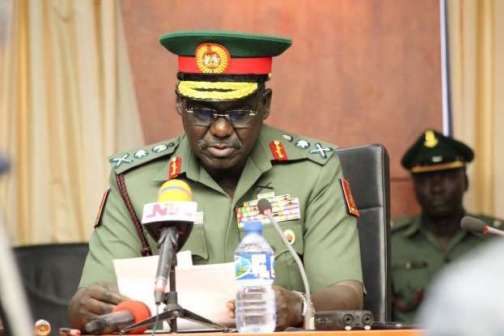 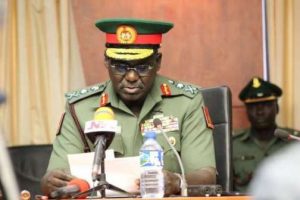 The Nigerian Army on Sunday said it had deployed new strategies to counter resurgence of Boko Haram insurgents’ attacks in some communities in Borno.

The News Agency of Nigeria (NAN) reports that Adeniyi addressed the troops at the 5 Brigade Battalion and interacted with members of Gubio community during the visit.

He dismissed as “misleading’’ reports indicating that the army had withdrawn its personnel from the affected areas which exposed the communities to insurgents’ attacks in recent weeks.

Adeniyi frowned at social media reports on troops’ withdrawal, noting that such misinformation created fear in the society and aided the insurgents’ atrocities.

The commander explained that the army, as part of its new strategy, set up “Super Camp”, shifted trenches and mobilized troops on mobile patrols to counter insurgency as well as protect lives and property in the theatre of operation.

“Nigerians need to understand that the army did not withdraw from Magumeri, Gubio and other locations in Borno and the northeast, as erroneously insinuated.

“The troops are now on mobility operation instead of staying in trenches in one location; the mobile troops would be moving to take the fight to the insurgents, protect roads and communities so that people can go about their normal life without fear.

“The new measure will enable the troops to dominate everywhere; deny the insurgents freedom of movement, enhance rapid response and render assistance to their colleagues when called upon in good time.

“It is true that the insurgents attacked Magumeri and Gubio; there were no loss of lives on troops and civilians, unfortunately a member of the Civilian Joint Task Force (CJTF) was killed and six other persons sustained injuries, either from stray bullets, or while trying to escape.

“The insurgents torched some targeted residential homes and public buildings in response to the owners’ allegiance to the government and the nation.

“Markets stores are stock with food items and other essential commodities but they were not looted or destroy by the insurgents.

“Gubio and Maguemri are under full military control, the troops repelled the insurgents’ incursion in the communities and people resumed their normal lives. We will continue to protect and provide necessary security to the people,” Adeniyi said.

He said the army had deployed additional patrol vehicles and equipment to facilitate smooth execution of the war against the insurgents.

While calling on the communities to remain calm and cooperate with the troops, Adeniyi pledged sustained military presence in the areas, just as he called on the troops to be disciplined and dedicated, to ensure total defeat of the insurgents.

Also speaking, Brig. Gen. Sunday Igbinomwanhia, the Garrison Commander, 7 Div., said mobile troops under the Super Camp operation were being deployed on a 24-hour patrol shift at Njimtilo, Auno, Jakana and Benisheikh communities, to ensure safety of the people and motorists plying Maiduguri to Damaturu highway.

Igbinomwanhia, who spoke to newsmen at Benisheikh, dismissed as ‘unfounded’ reports indicating that troops were withdrawn from the communities.