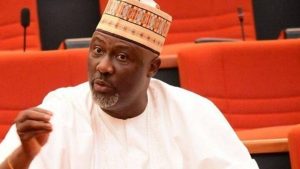 Candidate of the Peoples Democratic Party, in Kogi West Senatorial district rerun election, Dino Melaye, has given reasons why he will not congratulate, Smart Adeyemi of the All Progressives Congress, APC.

It has been reported that Olayinde Lawal, the returning officer of the Saturday’s supplementary election had on Saturday declared Smart Adeyemi of the All Progressives Congress, APC, winner at the poll.

The APC candidate got 88,373 votes to defeat Dino Melaye of the Peoples Democratic Party (PDP), his closest challenger, who polled 62,133 votes.

But, Melaye on his Twitter page on Sunday said, “Congratulating Smart Adeyemi will amount to congratulating an armed robber after a successful operation. SDM.

“I want to particularly thank God almighty that he preserved my life after 5 attempted assassinations, combined forces of security agencies, INEC, federal, state and LG powers. I was fought on land, in the air and spiritually. It was not about election but my life. God, I thank you.

“I will challenge the temporal and evaporative victory of Adeyemi at the Tribunal. Victory attained by violence and fraud is tantamount to defeat, for it is momentary. It is not about Dino MELAYE, it is about Nigeria and our electoral system. I stay the course, not over yet.”

“The reaction of men and women of goodwill all over Nigeria especially the wonderful people of Kogi west who truly voted for me is a testimony that God is with me and with us all. I won the election