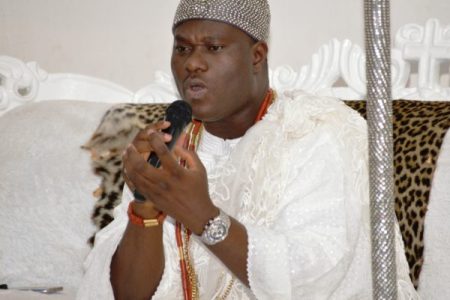 The Ooni of Ife, Oba Adeyeye Ogunwusi, has congratulated Gov. Gboyega Oyetola over the Supreme Court judgement affirming him as the duly elected governor of the state.

The Ooni asked the people of the state to fully support the governor in moving the state forward.

This was contained in a statement issued by his Director of Media and Public Affairs, Moses Olafare, on Friday in Ile-Ife.

Ogunwusi described the Supreme Court ruling as the will of the Almighty God.

He added that Nigerians, especially Osun indigenes and residents, must accept the ruling regardless of their political biases and focus on the development of the state.

The traditional ruler commended the opposition Peoples Democratic Party and its candidate in the disputed election, Sen. Ademola Adeleke, for going through the legally legitimate means to seek clarifications over the election.

The monarch urged politicians to emulate his gesture and remain peaceful in their conduct.

“It is heartwarming to have the Peoples Democratic Party and its candidate shunning violence and other illegitimate acts.

“Politicians must be seen to be peace loving and (should )always act legally on matters of political interest irrespective of party differences.

“No one is a loser, we are all owners of the state and we deserve all the best.

“The judgement is not about the Peoples Democratic Party or the All Progressives Congress, it is about us as a people of the same family and our unborn generations.

“Elections and politics have gone, no more distractions, the governor must now focus on governance.

“We all must join hands with the governor and his team to move the state forward with a view to giving the Osun of our dream the vision of the founding fathers, ” he said.

Double standards between men and women