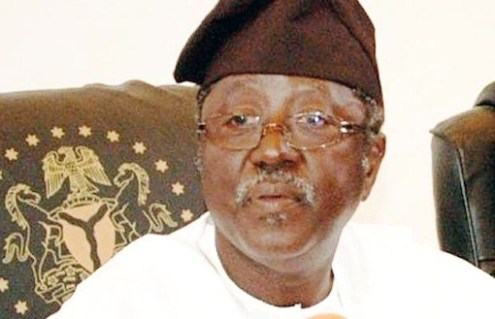 There was mild drama at the continuation of the trial of a former governor of Plateau State, Jonah Jang, on Friday as his counsel, Mike Ozekhome, SAN, disowned another defence counsel, over the line of questioning.

Jang is being prosecuted by the Economic and Financial Crimes Commission, EFCC, alongside Yusuf Pam, a cashier at the Office of the Secretary to the State Government, SSG, for an alleged N6.2 billion fraud.

S.A. Oguntiyi, counsel for Pam, had while cross-examining the 11th prosecution witness, Musa Sunday, an operative of the EFCC, queried the testimony of the witness, with regards to monies paid to Jang.

Replying, Sunday, however revealed more of the findings while investigating the alleged fraud.

He said: “Although there was no withdrawal from the OSSG account, a cash deposit of N500,000.00 (Five Hundred Thousand Naira) by the second defendant was seen on that particular day.

“In the course of investigations, during one of the interrogations with the team of EFCC detectives, the second defendant said the sum of N500,000 was a thank you gift and could not be accountable for.

“In the statement, dated January 16, 2017 made by Pam, he had however denied any receipt of any financial benefits from the Plateau State Government except salaries as a civil servant which was less than N80,000 monthly; so where then did he get cash of N500,000?

“Not only the N500,000, the second defendant during the interview had disclosed that there were several other monetary gifts passed to him by Jang. Moreover, more monies were seen amounting to N71 million in Pam’s personal account statement, Exhibit P28.

“The charges against Pam were not exclusive, but based on what the Legal team of the EFCC considered appropriate and as a civil servant there was no other source of income accrued to the second defendant, who is unable to prove the source of N71 million in less than four years.

“Sometimes allowances are paid in cash by the second defendant to officials of the Plateau State House of Assembly and such allowances can be over N1 million cash and in no particular order for sitting allowance, furniture allowance, domestic staff allowance, security allowance, and so on as sighted in the statement from Francis Bot, former Chief of Staff to the first defendant.”

At this point, however, Ozehome, rose up and expressed dismay at the line of questioning of Oguntiyi, and promptly disowned him.

He said: “I urge the judge to dismiss this line of questioning as it only further supports the investigation made by the EFCC and we are washing our hands off this mediocrity.

“If the documents are there why are you simply beating about the bush for hours on end?

“For lack of a better word, the judge must conclude the judgement on this case before his retirement by ending 2019. We do not want to embark on a de novo.

“At this point we (the counsel for the first defendant) disassociate ourselves from this line of questioning during cross-examination by the second defendant.”

Afterwards, counsel for the EFCC, Rotimi Jacobs, SAN, informed the court that he had wanted to present the 12th prosecution witness, “but due to the listlessness and lack of valid substance that the defence counsel took so much time, it is unfortunate that the witness may have to appear at another trial date”.

However, Oguntiyi pressed on with his cross-examination, asking the witness if there were Closed Circuit Television, CCTV Cameras, at the Government House, and whether there was an investigation report on the case, wherein findings and recommendations were contained.

Responding, Sunday simply said: “The question about CCTV cameras cannot be answered by me, but the officials of the Plateau State Government House”, adding that, “there was a comprehensive investigation report, however this is highly confidential and restricted for the EFCC perusal.”

Justice Longji, thereafter, cautioned the counsel, noting that the questions being asked, were mostly repetitions, and not necessary, wondering what Oguntiyi was trying to establish.

Continuing with the cross-examination, Oguntiyi thereafter inquired from the witness, if he was aware that the N10 million found in the account of Pam, was a pay-off for his late wife.

Expressing dismay, Sunday noted that he was hearing that for the first time, adding that: “All the findings, supporting documents, including the memos requesting for the alleged monies, the statement of account are before this honourable court as exhibit.

“And noting from EFCC records, between May 3, 2015 and April 11, 2015 Jang diverted sum of monies amounting to N1.5billion for the governorship and presidential elections.”

Judge Longji subsequently adjourned to September 30, 2019 for the defence team to close the cross-examination of the witness and continuation of trial.